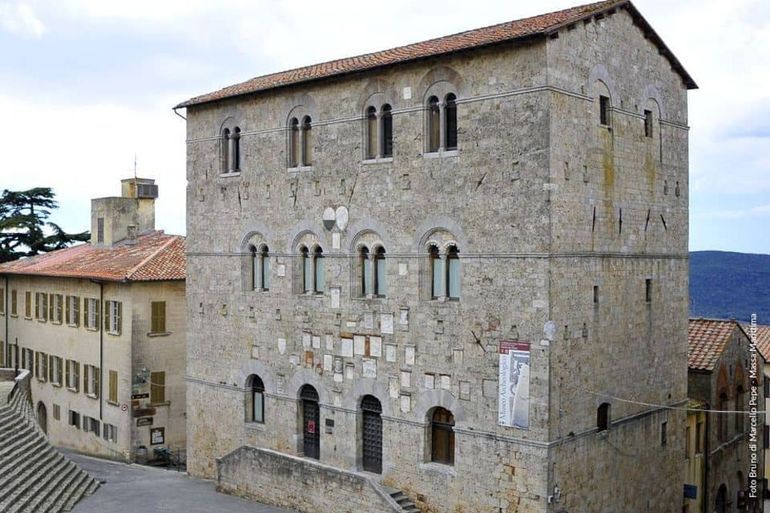 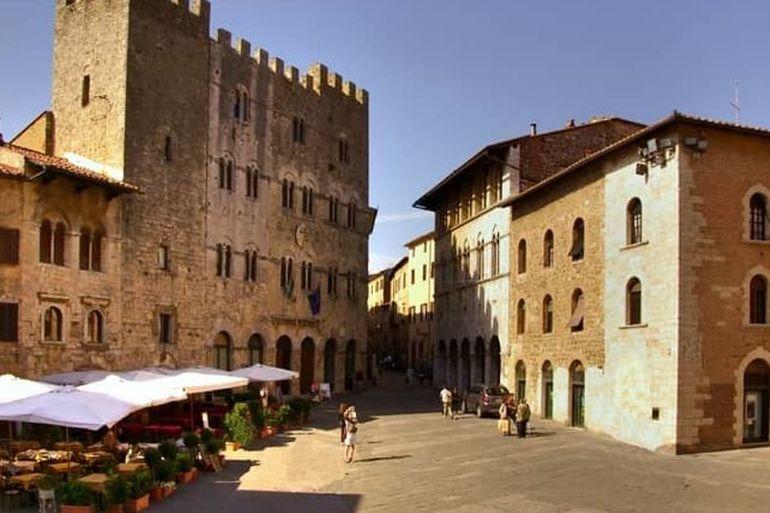 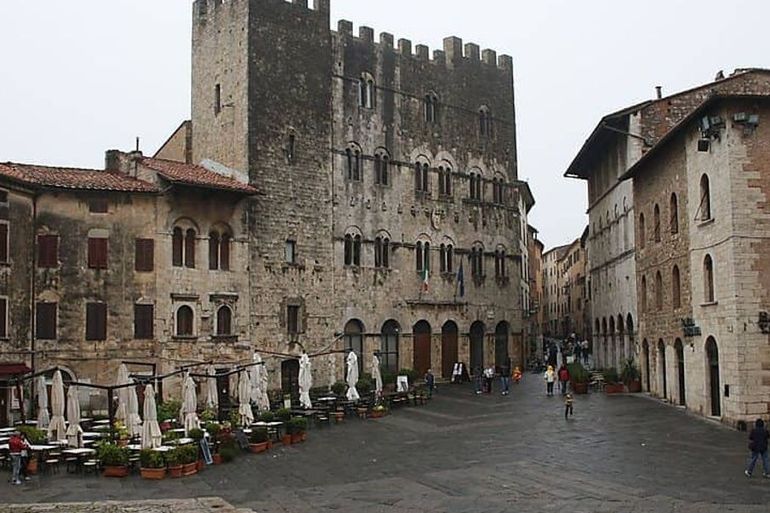 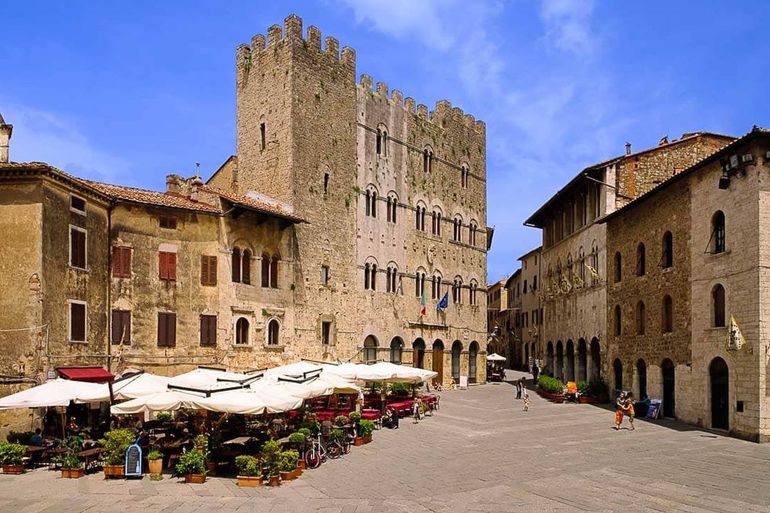 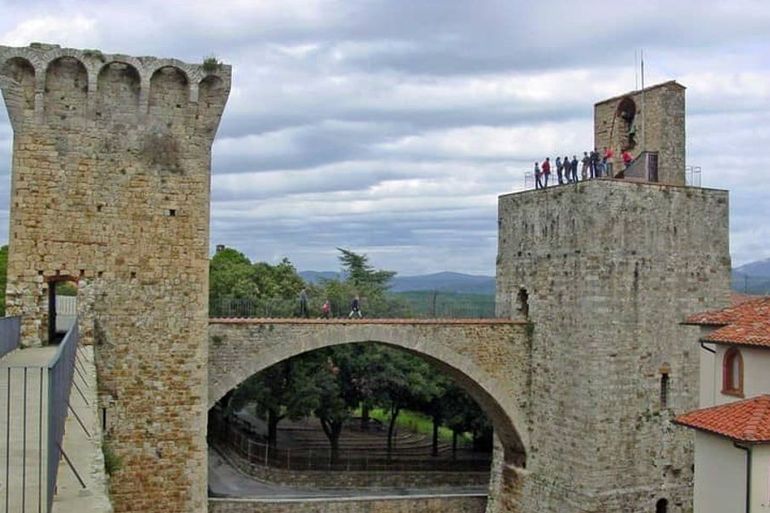 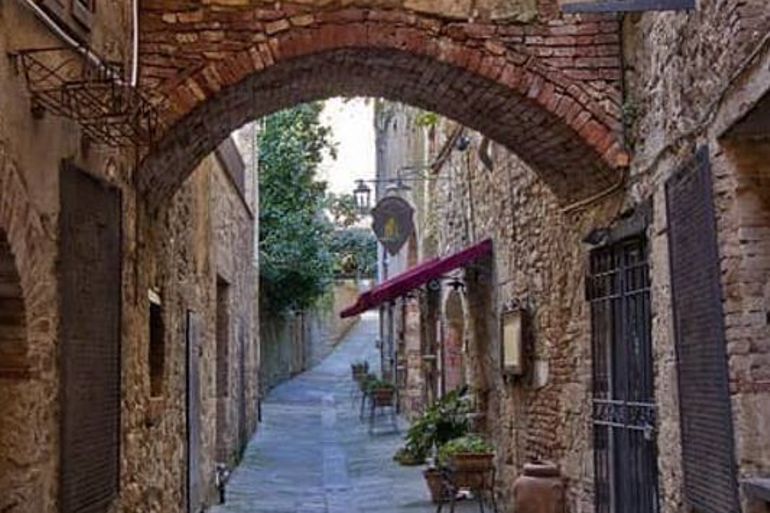 Piazza Garibaldi is the heart of Massa Maritima. Whether you like it or not, you can’t resist gravitating towards this piazza.

It just draws you in with its colour and vibrancy. There are always people sitting on the steps of the Duomo watching the street performers, the tourists or the markets that are often set up in the piazza.

Historically this has always been the centre of the city. When the Pisans came, they built it, when the Massetani were independent, they enlarged it, and when the Republic of Siena took over, they renovated everything.

There is no better place to admire the architecture of Massa Marittima, whether that happens to be from the steps of the Duomo or at one of the chic alfresco dining restaurants in the piazza.

The best place to start your visit of Piazza Garibaldi is at the Duomo. Once the medieval church has rendered you awestruck, turn your attention to the building to your right.

That’s the Palazzo del Podesta. An imposing square-shaped building adorned with the coat of arms of the city’s past noble families. Although the palazzo was built in the 12th century, its facade bears a later Romanic-Lombarian style.

The top coat of arms, half in black and half in white, belonged to the Republic of Siena. Above the right door, is a fantastic 14th century bas-relief of the legendary wolf and two twins of Rome.

Once the apartments of the Captains of Justice, the Palazzo della Podesta now houses the city’s archeological museum.

If you continuing turning to your right, the next building in the piazza is the Palazzino del Conte Biserno, built as a private home in the 13th century. With its cute little awnings and sculptured windows, this palazzo looks like something out of a Shakespeare play.

Part of this building is consumed by the first massive torrent of the Palazzo del Comune – Massa Marittima’s grandest building.

Built completely out of stone blocks, this palazzo looks more like a castle than a building. It is so big and elaborate that it was started in the 13th century, but finished a number of centuries later.

The palazzo is a symbol of the architectural changes that Massa Marittima experienced over the centuries. Medieval simplicity mixes with 14th century Romanic-Gothic. At the heart of the building is the coat of arms of the 16th century Medici family. The last pieces of the building were added in the 19th century.

Finish your 360-degree turn of the piazza with the Logge del Comune. A 13th century building that has been renovated so many times it looks modern. During the summer months, the restaurant on the ground floor of this building hosts the most amazing alfresco dining experiences, complete with a belly dancer!

While its not technically in the piazza itself, the Fonti dell'Abbondanza is a must-see. The building is famous for its fresco of a painted tree with male genitals in the place of leaves. The fresco is called the Albero della Fecondita.