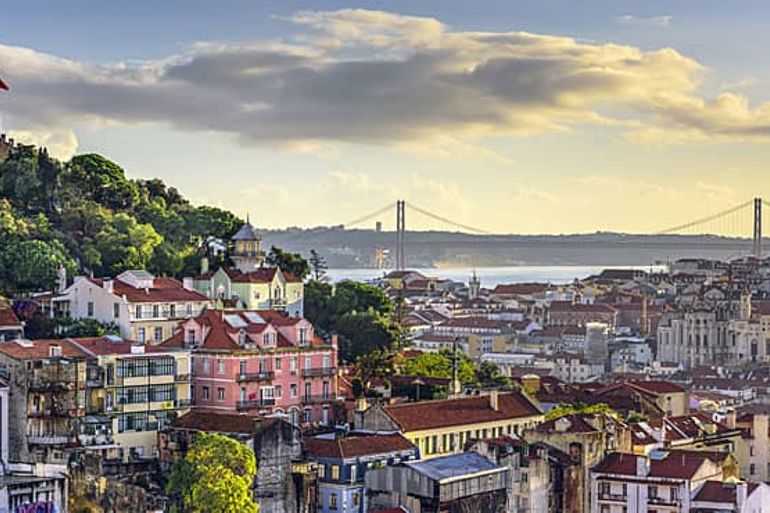 The Castelo de Sao Jorge is one of the oldest buildings in the city and one of the most significant and visited by tourists. Its position, on the highest hill in Lisbon, offers a breathtaking view of the whole city and the Tagus river estuary; missed the tour of the walls for a 360 degree panorama. Given its privileged position, the castle has always been a key point in the wars that have taken place over the centuries: the first fortified settlements date back to the 6th century BC. The castle was liberated from the occupation of the Moors in 1147 by King Alfonso Enrico with aid of the Crusaders, in the episode remembered as a siege of Lisbon. Later it became the seat of the Royal Palace but began to fall into decline starting from the XVI century, when the Palace was moved to the current Piazza del Commercio. Two strong earthquakes, that of 1531 and that of 1755, seriously damaged the structure that was gradually more and more abandoned. The period of recovery began in the 1940s of the last century, and now the Castelo de Sao Jorge is now one of the main attractions of Lisbon, suitable for those who love strolling through parks and gardens and want to enjoy a splendid view of the city from above. its walls. -

Castle The part of this complex that is referred to as "castle" is a fortress built by the Moors in the first half of the 11th century; unlike what the name might suggest, it was not a royal palace: it was instead a military garrison that could host the governor and the nobles of the city only in the event of a siege. You don't even have to think that this is the oldest building on this hill: on the contrary, it was the last defensive bulwark built by the Moors to protect the elite stationed in the "ciutadela". Historical evidence confirms the presence of settlements inhabited since ancient times. What makes this fortress particularly fascinating is its position: built on the most difficult access area of the hill by exploiting its natural slopes, the Castle has an imposing air, today striking, but we are certain that the sight of this building in past centuries was supposed to be intimidating to say the least.

Ruins of the ancient Royal Palace Starting from the 13th century, the ancient Moorish buildings were enlarged and adapted to house the royal court, the bishop and the royal archives; in the fourteenth century the transformation from military fortress to royal palace is already completed: it will again have a military-defensive function between the seventeenth and eighteenth centuries. The most significant remains of the ancient royal palace are the buildings that now house the permanent exhibition, the cafeteria and the restaurant; other architectural elements belonging to the royal palace can be seen in the area of the romantic garden and the gallery. Permanent exhibition In the halls of the castle there is a permanent exhibition on the history of Lisbon with finds from the archaeological site: it is a collection that covers more than two thousand years of history, with an emphasis on the period of occupation of the Moors between the XI and the 12th century. Dark Room One of the attractions that most fascinates visitors to the Castle of São Jorge is the Dark Room, which you can admire inside the Ulysses Tower, dedicated to the mythical founder of the city. A periscope located on the top of the tower captures images of the city at 360º and thanks to an ingenious optical system of lenses and mirrors, it gives visitors a completely original view. You can meticulously observe the city in real time, with its monuments and the most famous areas, the river and the people walking around unaware of your curious gaze. Belvedere If all the attractions listed above are not of interest to you, it is worth paying the entrance ticket to the castle to admire the extraordinary view of the city that you can enjoy from here. Thanks to its particular position, the Belvedere of the castle of Sâo Jorge beats all the other panoramic terraces of Lisbon: it is certainly the best vantage point to admire this wonderful city from above, perhaps at sunset time if you want to add a touch of extra romance. If you are passionate about photography you can indulge your creativity, but do not worry if you are mediocre photographers: with a subject so in front of your camera exceptional photos are guaranteed. Gardens The castle gardens are a small oasis of greenery in the city, where you can relax and get some fresh air after the climb. Heritage of the ancient royal gardens, trees of different species grow here: you can stroll among olive trees, maritime pines, carobs and other native species of Portugal. Archaeological site The only area of the castle which can only be accessed by guided tour is the archaeological site, which includes ruins dating back to three significant periods in the history of Lisbon: the seventh century BC, to which the first inhabited settlements date back, the era Islamic, during which the castle was built, and the period immediately following the earthquake.