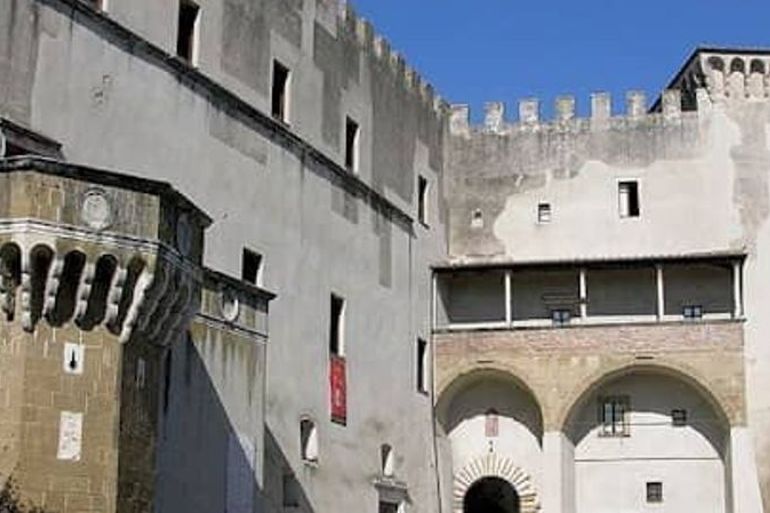 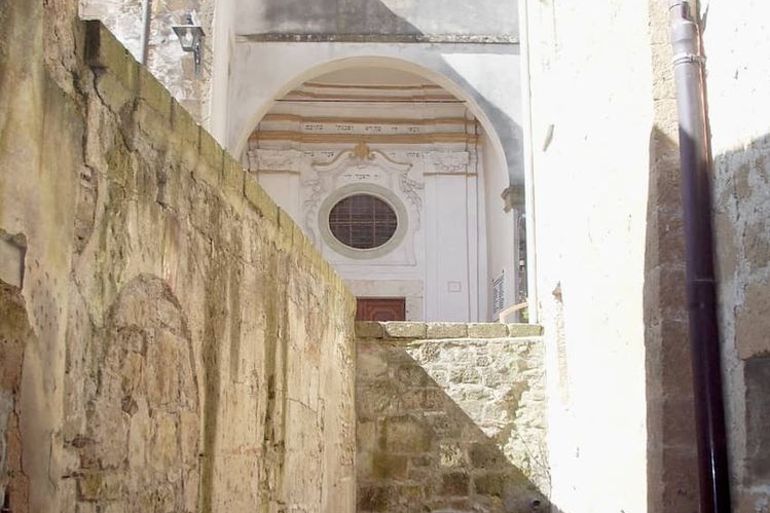 Off the beaten track of mass tourism, in the heart of the Grosseto Maremma, there is a town of Etruscan origins, Pitigliano, which in the feudal era hosted an important Jewish community.
An exemplary history of tolerance and integration to discover and re-propose.

Pitigliano's link with Jewish culture comes from afar : the first community to find refuge in the country dug into the tuff dates back to the late fifteenth century and created the Sinanagoga in 1598.

It was built, thanks to the funding of the Jew Leone di Sabato, in 1598.
Collapsed due to a landslide in the 60s was rebuilt, thanks to the intervention of the City of Pitigliano, in 1995. Today it is rarely used (weddings, bar-mitzvà ...), due to the lack of the Minian (10 men) serving for the celebration. The Aron ha-codesh (closet) is the most significant part of the Synagogues and is positioned in the most exposed wall towards Jerusalem. The Sefer Torà (Pentateuch) is located within it. La Tevà (the pulpit) is placed centrally with the benches all around. The singers sat in the semicircle in front of the Teva, while in the women's gallery (top balcony), behind the wooden balustrade, they watched the women during the celebrations.

Unfortunately, its original structures were partly destroyed during the Second World War but later it was expertly restored and can now be visited (except Saturdays and Jewish holidays).
On the walls, embellished with stuccos and decorations, there are numerous commemorative epigraphs in Hebrew characters. La Tevà , occupies the center of the place of worship, while in the background you can see the 'holy wooden ark; the Aròn. In the upper part, behind a richly inlaid balustrade, the benches of the matroneo hide, the upper part of the synagogue reserved for women.
The Jewish population has always been perfectly integrated in Pitigliano, so much so that the community is called the "Little Jerusalem".

Pitigliano, which housed the Jews perhaps since the end of the fifteenth century, became for them an important center of refuge in central Italy, together with the neighboring feudal places, following the restrictions due to the papal bulls of 1555 and 1569 in the Papal States and the provisions of the Grand Duke of Tuscany of 1570 and 1571. In fact the small independent fiefs on the border between Tuscany and Lazio remained immune to restrictions, such as the Pitigliano degli Orsini County and the Santa Fiora degli Sforza and Castell'Ottieri degli Ottieri, in addition to the Duchy of Castro dei Farnese. In these small states, many families of Jews took refuge, who could live here more freely and exercise their activities, starting with the loan of money. Many were the Jewish bankers and among them the family of the famous doctor David de Paris stood out, at the service of the Orsini of Pitigliano and the Sforza of Santa Fiora. Also in Pitigliano the Jewish group consolidated itself so much as to erect a Temple in 1598. When, at the beginning of the seventeenth century, the Medici aggregated even the small Counties into the southern border to the Grand Duchy of Tuscany, the Jews residing here were confined to the ghettos. But soon, realizing their considerable economic and commercial role, the condition of the Jews was improved with the granting of fundamental personal privileges. Thus the Jews of this area also retained the possibility of possessing stable assets, quite exceptional at the time. Meanwhile, towards Pitigliano a slow but steady immigration of Jews from the neighboring centers was directed, as the Jewish groups and communities residing there were in decline or disappeared. Significant is the arrival of Jews from the city of Castro, destroyed 1649 and of which Pitigliano was morally the heir. Other Jews came from Scansano, Castell'Ottieri, Piancastagnaio, Proceno and then in the eighteenth century from Santa Fiora and Sorano, whose Jewish communities started at the end, while Pitigliano remained the only Jewish community in Maremma. In the second half of the eighteenth century, the enlightenment reform of the Lorraine, new Grand Dukes of Tuscany, also allowed the Jews to partially access the municipal offices. Thus in Pitigliano the Jews had their representatives in the Community Council. In Pitigliano, the sole heir of the "haven cities" of the territory, the favorable conditions preserved for centuries made possible the development of exceptional relations of coexistence and tolerance between the Jewish and Christian population, so that the town was designated as "little Jerusalem" ". The extraordinary relationship between Christians and Jews was finally cemented by a singular episode of 1799, when the people and the major Christians defended the Israelites from the abuses of the anti-French soldiers, who wanted to loot the Ghetto. In memory of what happened, the Jewish Community set up a special ceremony, celebrated every year in the synagogue until a few decades ago. Thus the nineteenth century was opened, the century of major demographic, economic and cultural expansion of the Jews of Pitigliano, which reached a high percentage (up to 12%) on the entire population of Pitigliano. The institutions of the Jewish Community strengthened with the foundation of a Library and of the Pro Institute Council for charitable works, thanks to the generous legacy of Giuseppe and Fortunata Consiglio in 1854. Pitigliano supplied rabbis to various important Italian communities and regional figures in the Jewish world, such as the Flaminio brothers and Ferruccio Servi, founders of the "Vessillo Israelita", the first Italian Jewish newspaper, and Dante Lattes, one of the strongest and most versatile Italian Judaism of the twentieth century. For commercial reasons, Pitigliano became a center for the dissemination of Jews in many countries of the Tuscan and Lazio Maremma. But all remained linked to the community of Pitigliano, whose Synagogue they used to return for the major religious holidays. The changed economic and social conditions determined in the twentieth century a slow, but constant, emigration of the Pitiglianese Jews towards cities and larger centers, until the racial laws and the persecutions of the last World War accelerated the end of the Community, whose last flame faded with the closure of the synagogue in 1960. But during the war many Jews were saved thanks to the generous protection of the local population, who offered hospitality, shelter and assistance despite the obvious risks in the darkest moment in history. The long history of relations of tolerance, esteem and very often friendship and affection between Christians and Jews, which constitute the fundamental value of the exemplary experience of Pitigliano, closed so worthily. Therefore in Pitigliano, despite the fact that the Jews are today reduced to a few units, that ancient relationship continues in other forms; from restoration and conservation of Jewish monuments (synagogue, unleavened oven, ritual bath, cemetery, Jewish museum,) to the choice of producing kosher wine in the Cooperative Winery of Pitigliano, to the foundation of the Association "La Piccola Gerusalemme", which has as its purpose the promotion of initiatives to enhance the history of Pitigliano. (Note by Prof. Angelo Biondi