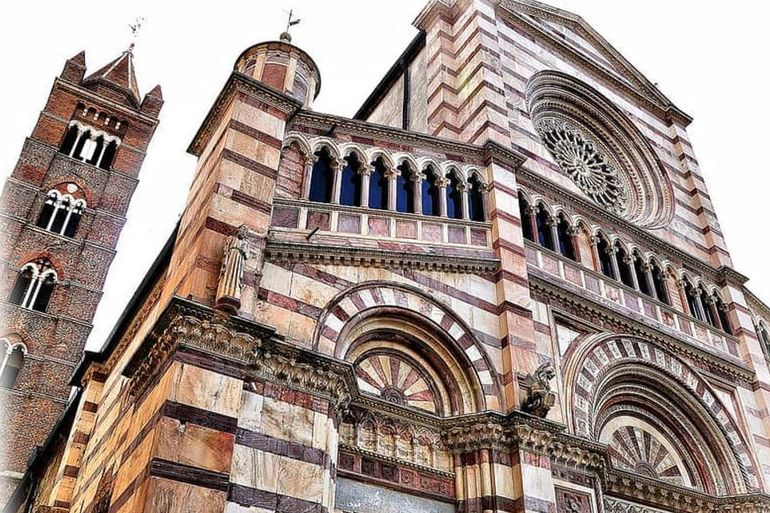 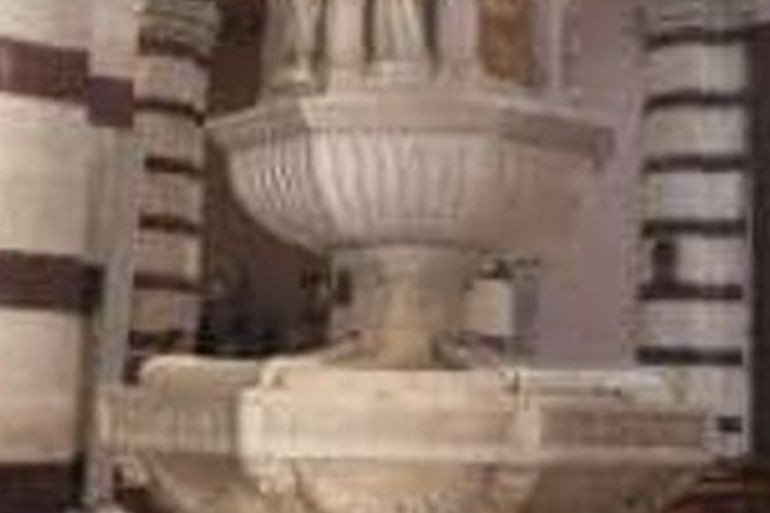 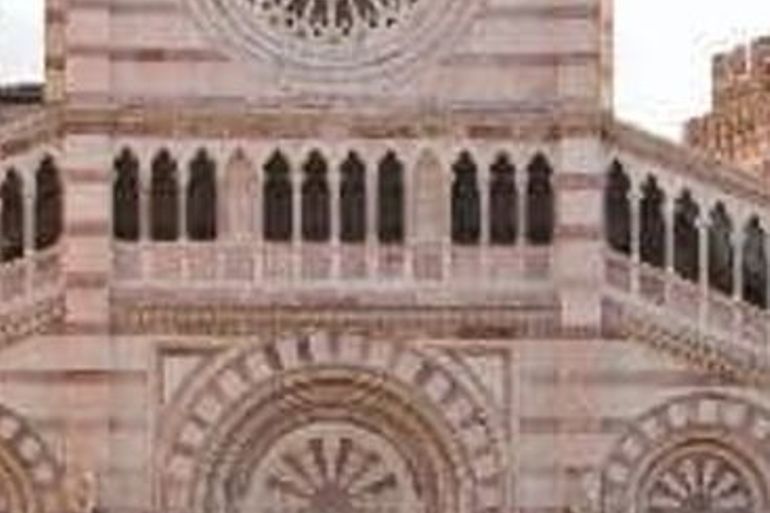 This is the heart of Grosseto and the heart of the Maremma. A cathedral as beautiful and as spectacular as anything you’ll find in Florence or Siena.

Most of the gorgeous structure you see today was built at the end of the 13th century by Sienese Sozzo di Rustichino, which is why the cathedral has such a Sienese air about it.

It was reworked in the Renaissance and Baroque periods and rebuilt in medieval style between 1840 and 1865, but it still retains its antique integrity.

I just love the romantic white and red Caldana marble facade. It was common for Gothic artists to alternate their colours on churches’s exteriors, and with flecks of green strewn through it, Grosseto’s cattedrale is one of the finest examples of this design.

It’s difficult to know which section of the facade to admire first. The portals, delicate cornices and grand arches draw your eyes to the large rose window at the centre of the facade. This beautiful window is so intricately designed and shaped that it’s a masterpiece all on its own.

If you have a keen eye, you can just make out the array of sculptures that adorn every corner of the exterior facade. Unlike the gargoyles of French cathedrals, these sculptures are of a strictly religious nature.  Four evangelists sit regally next to a venerable-looking bearded saint.

In the 16th century, two small lanterns were added on one side and two small obelisks on the other, just for a bit of artistic flair.

The bell tower on the left side was added in 1402. It was designed to have the same grandeur and majesty as the rest of the church and I think they succeeded, if I do say so myself.

Inside, the cathedral has a Latin cross with three naves divided by pillars and covered by cross vaults with six piers on each side and a semicircular apse, in which there are three minor apses.

That all sounds very intricate and complicated, but all you have to know is that this elegant interior design was part of the 16th renovations by Sienese architect Anton Maria Lari and given a bit of a Baroque update in 1858 and 1865.

The beautiful dome at the centre of the cathedral was designed in the 19th century. It might be young, but it’s decorated with stunningly bright and cheerful paintings, surrounded by a neoclassical stone cladding in contrasting bands that run down the roof and onto the pillars and arches.

There is plenty to see and admire inside the cathedral and the art and architecture ranges anywhere from the 15th century to the last century. It’s a mish mash of saints in agony, serene works of the Virgin Mary and plenty of gorgeously vivid background landscapes.

The stunning lunette is carved with Christ supported by angels and two lions, while the divine stained glass windows are the work of 15th century genius Girolamo di Benvenuto.

Keep an eye out for the breathtaking 17th century high altar. Covered in coloured marble and designed by Tommaso Redi, it is easily the most stunning piece of art in the entire cathedral. For added extravagance, the front of the altar was covered silver and gilded copper, taken from an altar in the Madonna delle Grazie church.

In the Chapel of Our Lady of Grace, in the northern transept, you’ll find a painting of the Assumption of the Virgin with angels. Master painter Matteo di Giovanni finished the work in 1470, but to show their devotion, the pastors decided to ask another painter to add a crown to the Virgin almost three centuries later.

I’ve given you a pretty basic rundown of the wonders inside this cathedral, but to truly appreciate its splendour, you really need to see it for yourself.

The majesty of the interior with its sparse, but well-chosen paintings and dominating marble columns will transport you to a time when only the best artists and most beautiful treasures were worthy enough to adorn a church.

And this in itself creates an almost magical atmosphere that will hold you here in awe for hours.